This funny animal portrait features a dapper velociraptor dinosaur dressed up to look extremely fancy. Part gentleman, part beast, this velociraptor is classy. He will wash down your flesh with a nice glass of Merlot.

He wears a white tuxedo vest with a red rose on his chest, and underneath that is a pink dress shirt and a purple tie to match. His dress shirt is torn off at the shoulders with rough, tattered edges, giving him both a classy yet rugged appearance. He's also wearing a fancy white hat to match his suit pants and vest, and to top it all off, a golden monocle. He's raising a glass of red wine in the air as if to say "Cheers!", and the entire background of the scene is enveloped in a purple, smoky haze.

This quirky, eccentric canvas art piece would make a welcome and interesting addition to any man cave, bachelor pad, poker room or home bar area. Add it to your wine cellar, pool table room, or place it above the bar cart. An extremely versatile art piece, there's virtually no room that it wouldn't look good inside of.

A great pick for the kitchen or dining room because of the wine it features, it would also look fantastic in any living room or bedroom. Kick back with this piece on the wall of your lounge room, or get laughs from your fellow college students by adding it to your dorm room. It's an especially great pick for any room or area where drunken partying is likely to take place—deserving a prominent spot in any frat house or sorority home.

"Dapper Velociraptor" is what you get when prehistoric life acquires a stylish sense of fashion. He is out of the science museum and inside of your dinner party. This piece would be a great choice for any person who works in the field of paleontology, geology, paleobiology or evolutionary biology. It's an artwork piece that any science lover and book nerd is bound to enjoy.

About The Velociraptor Dinosaur:

The Velociraptor was a theropod dinosaur that lived in the Late Cretaceous Period, between 75–71 million years ago (which spanned the Campanian and Maastrichtian epochs). This bipedal dinosaur stood on two legs, and based upon the fossil evidence, they are now believed to have been at least partially covered in feathers.

Despite their depiction in the Jurassic Park film, they were actually smaller than they're often portrayed in popular television programs and movies—instead growing to be roughly the size of a wolf. More accurate scientific depictions of the Velociraptor dinosaur can be seen in educational programs that include Walking With Dinosaurs and a variety of other History Channel or BBC science documentaries.

Velociraptor skeletons have been discovered in countries that include Mongolia and China, and there's even one famous fossilized specimen that forever preserves the bones of a Velociraptor locked in combat with a Protoceratops dinosaur. The comparably massive skull of this Protoceratops specimen did not appear to stop the bold and daring Velociraptor from trying to turn him into a meal.

Closely related to the infamous "terrible claw" dinosaur Deinonychus, while the Velociraptor wasn't nearly as large as their relative, it nonetheless retained the similar sickle-shaped claw on its hind legs which was used in hunting and slashing its prey. Other closely related dinosaurs which had similar genetics include Utahraptor, Acheroraptor, Achillobator, and ﻿Dakotaraptor.

Velociraptor likely hunted a variety of smaller creatures which included reptiles, amphibians, insects, smaller dinosaurs and mammals. In turn it was likely preyed upon by some of the larger, more fearsome dinosaurs of the time including Albertosaurus, Carnotaurus, and Tarbosaurus. Contrary to popular belief the Velociraptor actually did not coexist with Tyrannosaurus rex, which lived during a different time period. Other dinosaurs during the ﻿Triassic and Jurassic periods may have looked similar to ﻿Velociraptor﻿, but none are believed to have matched ﻿Velociraptor﻿'s discerning taste in red wines. It literally felt like Christmas morning when this thing arrived. Can't wait to show it off to people! 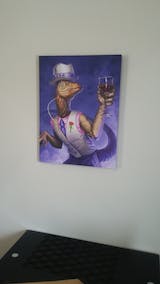